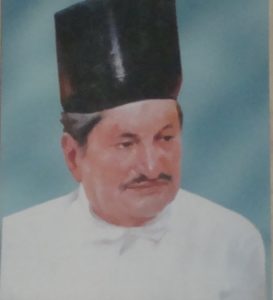 Charity is a supreme virtue,

And the great channel through which the mercy of God is passed on to mankind. It is the virtue that unites men and inspires their noblest efforts. – Conrad Hilton

A committed philanthropists and great lover of the Parsi community!

Jamshedji was a son of the Parsi community, a Samaritan for the needy, a follower of the zarthusth religion. A successful businessman with a jovial nature, that is Jamshedji Guzder. He proved his worth by working with industrialists like the Tata, Birla, Wadia, Larsen and Tubro, and DHL Groups. He has also been the president of All India Chamber of Commerce three times.

Jamshedji was the fifth son of Nasarwanji Sorabji Guzder, born on 5/2/1917. His mother Gulbanu greatly admired Jamshedji Tata and named her son Jamshed wishing him to become a successful person just like his namesake.

The Guzder family was in the cotton business since 1907. After the demise of his father, Jamshedji took over the management of this business in 1934. He was chosen as the ‘Cotton Merchant Agent’ by the Swadeshi mill of the Tata group and the Bombay Dyeing mill of the Wadia group. Then after, he served as the ‘Clearing Agent’ and ‘Transporting Agent’ of the Taj Hotel and the Tata Electric Power Supply Company. From the age of 18 to 60 years, he has been the Director of various companies.

In the Farsi language a person who keeps a measuring stick in his hand is called ‘Guzder’. Jamshedji’s father and grandfather used to measure the wood from the Waghai-Dang area of Gujarat. They resided in Gandevi which was situated on the banks of the Ambika river. The Parsis of this region associated with this profession were known as Guzder.

Jamshedji firmly followed Gandhiji’s principle of Trusteeship. In 1990, a Parsi Lady gave Jamshedji the responsibility of managing her property of 2.5 crores and using it for charity. Thereafter he also received Rs. 26 crores by selling the shares of the Parsi Lady. He divided the money and formed Trusts for Parsis and other Public Trusts for the proper management of the funds for public welfare. He firmly believed that ‘Charity begins at home’.

He served the Parsi community as the President of the Parsi Panchayat for three decades. He became the ‘Chairman Emirates’ of the Parsi community. He formed his family Trust in the name of the ‘Jamshed Shirin Trust’. A large part of the profit from the family business was used through this Trust for Charity.

Jamshedji’s wife Shirinbanu was always supportive in his charity work. He has a daughter Statira and two sons Cyrus and Farookh. Jamshedji has given a noteworthy contribution in the progress of his native Gandevi. He has served as the Chairman of the Sir C.J. New High School Trust and played a vital role in the progress of the institute. He has provided financial support to the Trust and has been the sole donor for the English Medium School which has been given name The Jamshed and Shirin Guzder English Medium School, after him and his wife. He ensured continuous support to the schools from his Family Trust after his demise too. His daughter, Dr. Statira Wadia is the Chairperson of the Trust.

Jamshedji Guzder has always been an exemplary person. His love towards this institution, his generous and loving nature, his intellectual personality is unparalleled. The following lines stand true for Jamshedji…..

ANY QUESTION? JUST GIVE US A CALL OR SEND US AN EMAIL